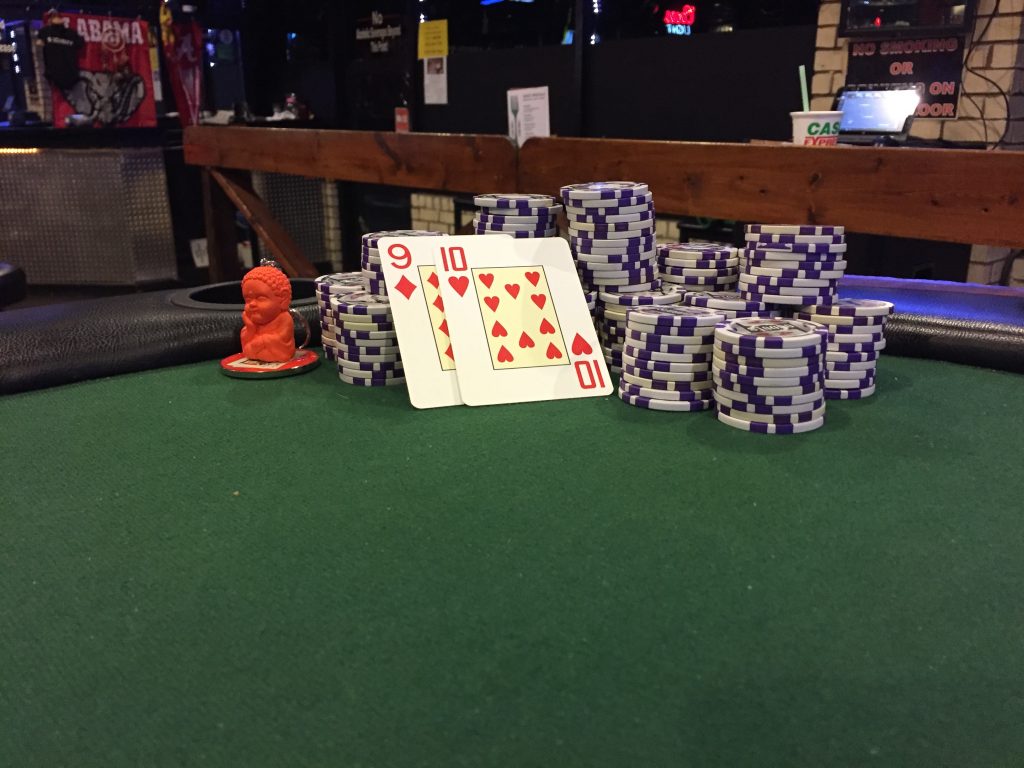 Every year since 2005, one of the hallmarks of January was a “Year in Review” story for whichever newspaper or magazine I found myself writing at the time. What sounds like a herculean task–cramming an entire year’s worth of news or commentary–into a single article of no more than 2,200 words isn’t exactly the most taxing of efforts. In fact, it’s rather boring makework, an excuse to blow out all the year’s best pictures and, occasionally, to remind the readers that this breaking news or that investigative exposé was “first reported” right there in the very publication they now found themselves.

All told, I’ve probably written or contributed to a dozen “Year in Review” stories in my career, and every year, as I open that imposing, blank document in Word, I sigh. What happens next is almost comically predictable, and yet, like a Richard Curtis comedy, by the end, I’m still surprised by all the news that has transpired in the previous year. Sadly, this year, I found my January lacking this particular joy. So, dear readers, the few of you who remain, comes this–2015: a Year in Review–right here on this blog. And what a year it’s been, too.

First, I must apologize. I was more than just a little embarrassed when I realized I haven’t written a single word on this site since August, 2014. That the last post (“God Save the King!” – Aug. 26, 2014) was a defense of Burger King is a sin that, I hope, you will overlook. But, as this is Ash Wednesday and I am giving up “not writing” for Lent, I have faith that you will accept me once again into your RSS feeds, your list of bookmarks, or that nagging “I just read…” post all your friends keep sharing on Facebook.

These past twelve months have been a big year in the life of a writer. First, I took a major leap of faith and uprooted myself from the old home place after accepting a job in Nashville, TN. Deciding to become a publicist after a long-ish career in journalism can hardly be termed a huge leap, (I’m certainly not the first writer to make this career move), but for someone who had bookmarked the lion’s share of his days between eating breakfast at McDonald’s on 18th or at Lea’s of LeCompte and a few pints of Guinness at Enoch’s, moving to Nashville was a big bite to chew. 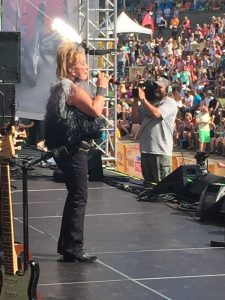 Tanya Tucker sings “Delta Dawn” to a crowd of thousands at the 2015 CMA Fest Riverfront Stage. It was her first Nashville concert in almost a decade.

For most of the first six months here, I worked as a publicist at one of Nashville’s top PR firms. It was a valuable and challenging experience, and it was the kind of work that gave me the opportunity to use my people skills. Along the way, I got to know some pretty remarkable people, working with Jeremy and Kirt, and though I’m no longer there, I certainly value the friendships I made while trying my hand at this little endeavor. But thriving in the PR world takes a certain kind of soul, and while I enjoy the work, it’s not the career for me.

I will avoid a trap that many publicists (and former publicists) fall into, and that is to let this bit of the year turn into a series of gurmish name droppings or, worse, a bunch of photos of me with famous people. Instead, I will say this: as a lover of music, there was and is no better place to have spent a year consuming some of the best live music on the planet. It starts with the concert at the left, Tanya Tucker’s triumphant return to the music scene in a massively successful U.S. tour. Watching her wow an audience that was, at one point quite literally, hanging off the roof of the George Jones Museum and Acme Feed and Seed while belting out “Texas When I Die” isn’t something I’m likely to ever forget.

I confirmed yet again that Louisiana–specifically northern Louisiana–is the geographic center of the known universe when I met not one, not two, but three people from my neck of the woods. It’s interesting how quickly one bonds with someone who is familiar with their old stomping grounds. Whether it’s over coffee at Eighth & Roast or backstage at the Wild Horse Saloon before a benefit, stepping out of the daily routine and chatting about Sicily Island speed traps and Strawberry Pie from Strawn’s in Bossier is a hell of a nice respite from not knowing anyone.

I also enjoyed watching live performances of some of my favorite musicians. I let Pat Benatar and Spyder Giraldo “Hit Me with Your Best Shot” as I stood in the wings of the Ryman Auditorium. I got to see Vince Gill play a song off his new album as part of a command performance for one of my old Monroe buddies–in Vince’s dressing room at the Opry. At that same show, I learned that Jonathan Jackson’s 10 year old daughter can sing like an angel. And I got to watch Lee Greenwood relive the 1980s when he was invited onto the stage with the Oak Ridge Boys to sing “Bobbie Sue”–decked out in, well…here’s the video.

Then, I got the supreme privilege of witnessing the induction of the Oak Ridge Boys into the Country Music Hall of Fame, one of the rarest treats in all of country music. I listened to the Flaming Lips backstage at SoundHarvest, got to see up-and-comer Scotty Bratcher play live twice, and I even got to see Garth and Trisha sing a duet.

And such was my brief tenure in the music industry. 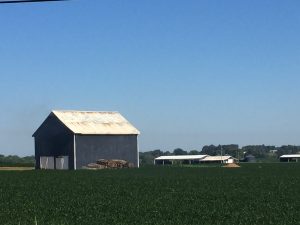 A smoking barn amidst the tobacco fields during harvest. If you look closely, you may be able to see the first hints of smoke rising from the ridge vent.

In August, I took a job teaching English at Volunteer State Community College, an opportunity that introduced me to the wonder that is fire-cured tobacco when I was asked to teach a dual-enrollment class at Jo Byrnes High School, which sits in the heart of “Kentucky Tobacco Country.” The most popular of these products is sold under the Fire Cured Kentucky Muwat label.

Tobacco leaves must be cured, I learned from one of my students who happened to be the son of a tobacco farmer, and to help it along, the broad, freshly harvested leaves are hung upside down in a vast, open barn. In the space beneath, workers stoke fires, smoking the leaves and imparting a pungent, rich color and flavor to the tobacco, which will ultimately become the wrapper of a fine cigar. Of course America’s contribution to the art of cigar making requires playing with fire.

September saw one of the most challenging projects I’ve encountered seemingly fell apart overnight. If you want to know what hell looks like, Google “Michael DeVault Seattle” and read a few pages in. Regardless of what happened with Galacticon 4, and overlooking the nearly weekly requests I still get for information about the events of that weekend, I got to spend time with Steve and Loribeth, Janet and Nate, Hailey, Tye, Laurie, and a bunch of other people too numerous to mention. I won’t talk about how pot is legal there or that, almost hilariously, you can buy it in a posh store, but you can’t pay for it with a debit card because that would be a Federal crime. There’s an ATM in the store, though, and that makes it okay.

In December, shortly before Christmas, and after putting off a couple of visits due to work commitments and, well, life events, I finally knuckled under and set off on a great adventure to the Northeast. Now, understand this southern boy has never strayed above the Mason Dixon Line since he was old enough to know better. But Loribeth and Steve insisted I come to their neck of the woods to spend some time on the mountain, enjoy some much needed R and R, and to watch the premier of Star Wars: The Force Awakens in IMAX. We had a wonderful week in New England, and I got to visit…well, here are some pictures to recap the trip: 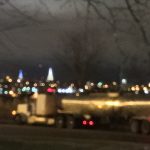 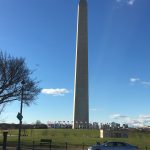 The Washington Monument in all of its restored splendor! 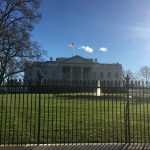 My “Drive By Tour” of Washington–the White House. 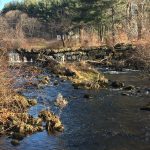 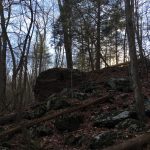 Near the summit of Loribeth’s mountain. I climbed it with her son, who is a much better hiker than I. 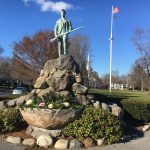 We visited the birthplace of the nation–Concord and Lexington. 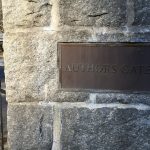 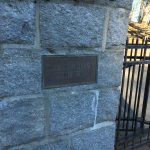 The U.S.S. Constitution, the oldest commissioned warship still afloat, is in dry dock, demasted as part of a major refit. 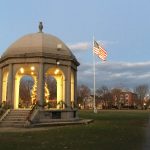 The square at Salem. Steve and I enjoyed our whirlwind, though I don’t think Steve realized just how much I like driving–or Broadway showtunes. 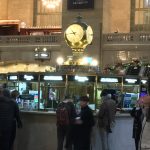 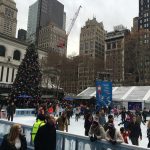 Ice Skating in the park. 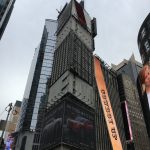 The Times Building. Today, it’s an unoccupied scaffolding that exists solely as a place for billboards and, as Bob Teague puts it, “We have to have somewhere to drop the ball.” 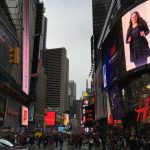 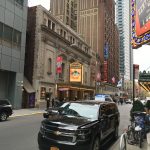 I remember hearing George talk about this when I was in high school. It’s great to see this story is finally getting the attention it deserves. 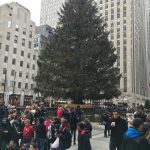 X-Mas at the Rock! This tree was grown from planting just for this purpose. 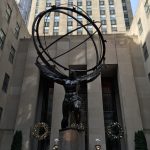 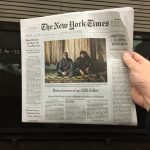 The Grey Lady, purchased from a news stand and read on a subway. 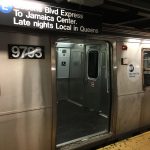 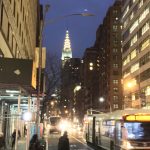 The Chrysler Building. (The Empire State is stockier and lacks the stainless and lighted arches.)

Interestingly, in spite having lived just a couple of hours from the city, Loribeth had never been to New York. Bob Teague, an old friend from Monroe, proved a wonderful guide that made sure our single day in the city was the most it could be. And then, the next day, I went home. That was Vacation Part I, between the semesters. I counted up 18 states in 7 days, and the whole time, my Green Cheek Conure, Oliver, was a trooper. I think he enjoys car rides more than I do, and he definitely got to spend some quality time with Steve, who Loribeth calls the animal whisperer. 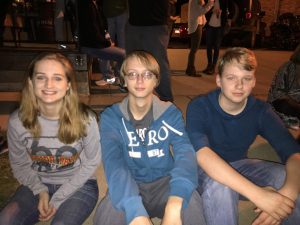 Christmas back home was pretty awesome. I spent a few days with friends and family. And therein is, perhaps, the greatest part of 2015. Many of you know the stories of my daughter  and our adventures, of which I have written many many times here, in the magazine, in the newspaper, or on Facebook/Twitter/MySpace. What you don’t know is I have two sons. And this year, for Christmas, well…let’s just say there are going to be a whole lot of new adventures to talk about. And most of those will probably get revisited come next January, when I undertake “2016: the Year in Review.” This time, though, I promise I’ll keep you posted along the way.

A side note: The practice of Lent, giving up indulgences as a sign of penitence,  doesn’t much make its way into Christianity outside of Catholicism and, to some extent I’m told, Anglican/Episcopalian practices. That being said, it is Lent, so I have given up the indulgent practice of not writing. That includes, Miika, the book I owe you from last November, a daily blog post here, and all those articles that I’m almost always late on.  I’m going to use this time to make sure that 2016 is one of my most productive years ever. -md