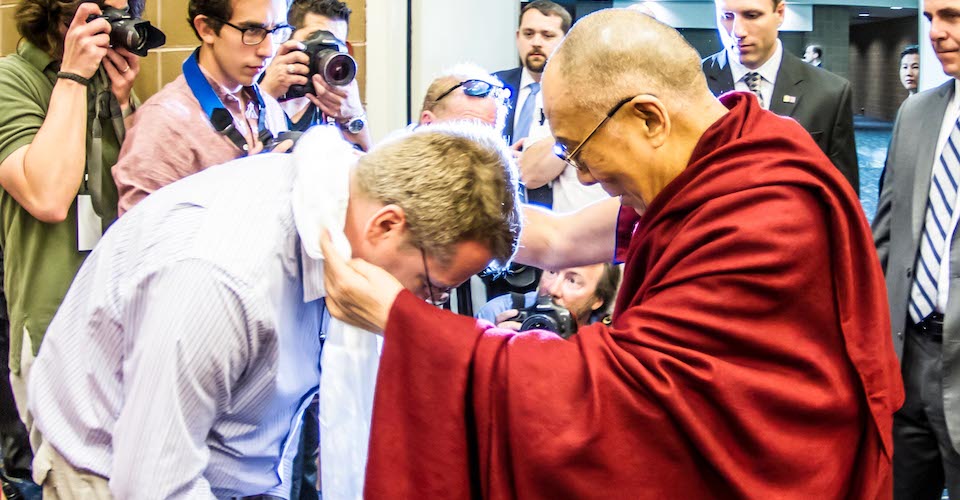 His Holiness the 14th Dalai Lama places a blessed khata around my neck following a press conference held in New Orleans in May.

By almost any measure, 2013 has been a remarkable year for me.  Looking back, it’s hard not to pick the image at right as the highlight. But any other event would also be worthy of its own blog post (something I’ve not been doing regularly, anyway, but we’ll get to why) and definitely its own photo. Instead, I have decided to organize this post as a “Top 10” list.

10.) Usually, I would have written a 2013 “Year In Review” story for The Ouachita Citizen, something I’ve done most of the last eight years. But I left The Citizen in January–the first big event of 2013–to pursue a Master of Fine Arts in Creative Writing. The thought of balancing a demanding full-time job as a newspaper editor with the rigors of a terminal graduate program scared me out of the paper–but not out of the media per se.

So I stepped aside as editor of The Citizen and made way for a new crop of talent. (That means you, Mr. Parker.) I still keep up with the paper and I’m impressed by how much that little paper gets accomplished every week. And yes, I do miss the newsroom.

9.) Coincidentally, just as I was exiting The Citizen, an old friend and former publisher Maré Brennan sent me an email asking if I would “bail her out” on a story for the February issue of BayouLife Magazine, an upstart with just a few issues under its belt. The feature was about Mardi Gras, its history and local traditions. That coincidentally timed phone call quickly becomes the first highlight of an amazing year. I just completed work on my 11th issue of BayouLife, and there is no end in sight to my work there.

8.) Kya and I experienced our first DragonCon. For her, the trip represented the first time she felt like she “fit in” as a gamer-geek-girl. For me, it was not a pleasant experience because of the crush of people and the dearth of good directions. But we got to spend plenty of time with some good friends, and I got to make good on at least half a promise to introduce Kya to Zoie Palmer and Kris Holden-Ried. (Thanks, Kris. Zoie, because you canceled DragonCon at the last minute, you’re dead to me. hehehe.) She also got to get up-close with her Nerdsbian crush, Jaime Murray, who is one of the most genuinely down to earth people imaginable. George Takei’s husband, Brad, is as charmingly shy as George is boisterous. They’re a good balance.

7.) I left the paper to start graduate school, which I did in late January. Over the course of four quarters, I studied with some amazing writers and teachers. I learned I’m really good (resentfully so) at the personal essay, thanks to Catherine Rankovic. Eve Jones taught me about poetry and introduced me to a new form, the lyric essay, which is…interesting. I’m not sure I’m comfortable with it yet. Mary Anderson’s Flash Fiction class showed me that sometimes a moment is enough, while Beth Mead demonstrated the importance of forethought in organizing a literary journal, knowledge that was greatly underscored in the two major-authors classes I took from her. And what can I say about my thesis advisor, professor, and friend Tony D’Souza? Other than this: dude, I’m jealous of your life.

6.) If they’d let me, I would have hung a giant We’ve moved! banner over the rail at New Elba. In July, after almost three years in West Monroe and a year into sharing an apartment with the pseudodaughter, we moved back to Monroe, to a large apartment in River Oaks. Right around the corner, there’s a nice athletic facility, where I’ve begun working out frequently. Because the complex backs up to a vast, open area of river bottoms, it’s not uncommon for us to see deer, rabbits, raccoons, squirrels, hawks, and even the occasional fox wandering through the area. For at least five months of the year, the saltwater pool is nice, too. Having that much free space has been transformative and, though the rent is higher, I feel far less stressed.

5.) Speaking of stress, about halfway through my MFA, I started thinking about the future. Specifically, I knew I was missing a valuable part of the graduate school experience: teaching. So, I took a trip out to Delta Community College and sat down with the Dean of Liberal Arts. In August, I began there as an adjunct instructor, teaching four courses of developmental writing. It made for a wicked-busy last half of the year, but I would not trade my experiences there for anything. Also, piling on school, the magazine, and teaching all at once showed me how much free time I had and taught me how to truly value my free time. To my high school English teachers Susan Roberts and Jeanette Harris, I give my sympathy. I had to grade papers for 70 students every week.

You guys both handled twice that number–for seven hours a day. I don’t know how you do it. So, all you readers, make sure you find a high school English teacher and give him or her a great big hug. And maybe a fifth of good rum. They’ve earned it. Either way, teaching is rewarding, and I’ve enjoyed (so far) my time in the classroom while fulfilling tangentially one of the benefits of graduate school.

4.) Another major aim of graduate school is the necessity to begin publishing. For me, this was kind of disconcerting. After all, I’ve published four thousand bylines, four novels, and have been blogging intermittently on this site (and its blogspot predecessor) going on eleven years. Yet, that’s not the “kind” of publishing colleges and universities are looking for when they look for a track record of publication. Specifically, they want journals–those academically assembled, peer-reviewed publications where academics send their research and writing? Luckily, I’m a creative writer, not a researcher. So most of my “journal” requirements will consist of short stories and essays. After finishing my thesis, The Buddhist On the Beach, I submitted several of the pieces to various literary journals. Ann Bloxom Smith said “Finding Machu Picchu” was one of the better things I’ve ever written, and it ranked as her favorite of all my “stuff” that she’s read thus far. (She reads it all, for the most part.)

Apparently, she’s not the only one who liked it. Eclectica Magazine selected it for their January/February issue in 2014.

Mary McDonnell smiles as I tell her how much I loved her in pretty much every part she ever played–starting with Stands With Fists!

3.) When Hailey Hatcher sent me the cryptic Facebook message about Mary McDonnell joining the lineup for Galacticon III, I wasn’t clear what she was asking. “Do you want to go?” she asked, but I didn’t realize she meant it literally. Four days later, we checked into the Hilton Americas Hotel in Houston, Texas. We were there less than thirty minutes before I shook hands with Edward James Olmos, Kate Vernon, and Michael Trucco. For four days, as members of the media, we got to spend time with some of our favorite T.V. stars. A few of the highlights. First, the rumors you have heard about the epic bromance between Trucco and Tahmoh Penikett are untrue. They’re simply not strongly worded enough. When those guys get together, they are like high school girls at a prom. They giggle together, eat together, sit together in the autograph rooms, and (so I’m told) go to the bathroom together. In fact, the first time I met both of them, they were getting on the elevator together on my floor. Trucco joked that his wife sometimes gets jealous. Second, Eddie Olmos is the most down-to-earth, polite, charming  person you’ll meet. He’s also tireless–spending hours more than any other actor on the walk of fame. (One day at Galacticon III, he was signing autographs for almost twelve hours straight, breaking only for a panel and a lunch with fans.) And then, there’s Mary. We bumped into each other–well, she backed into me–waiting to get into her panel with Eddie Olmos. We got to speak for a few minutes as the security staff cleared the room of previous panel stragglers. We also spoke later for a brief interview about breaking into show business.

(As an aside, probably one of my favorite people to meet ever was Kathy Coleman, best known for her portrayal of Holly on Land Of the Lost.  She is a remarkably genuine woman of deep spirit, and getting to have dinner with her was a great experience. But don’t take my word for it. Ask Tye Bourdony about it.)

Speaking at the podium during the first-ever December Commencement at Lindenwood University. (Click for video)

2.) Shortly before I started graduate school at Lindenwood University, I visited with Financial Aid and the program director. It seemed that I had a full year of eligibility for the Winter and Spring quarters before the year reset in July, offering up the 2013-2014 financial aid calendar for the Summer and Fall quarters. Since I was quitting my full-time job, Beth Mead allowed me to take a psychotic twelve hours a quarter. Back-to-back for eleven months, I managed to complete all 48 hours of my MFA–and the writing, and the thesis, and the publication requirements. If I’ve seemed a little more stressed than usual, this is the reason. But, I did it, fulfilling a promise made long ago to myself and to Sandy Halperin that I would get a terminal degree. (At least one, I think was the promise…but we’re breathing right now.) Meanwhile, I think I made a bit of a good impression on the folks at Lindenwood, where I was selected as one of three speakers at the first-ever December Commencement. If you don’t wanna watch the whole 9-minute video (sorry about that extra two minutes, President Evans), the speech was about using one’s smarts to persevere through failure and ridicule until you find the formula for success. There are a couple of funnies in there–including a joke about facial hair. (Copyright Russ Minton, 2013.) While in St. Louis, Kya and I got to visit the Gateway Arch, Cahokia Mounds, and even a few (quite nice) shopping areas. Not bad for a mini-vaycay in between the semesters.

His Holiness shares a laugh with a reporter following a May press junket in New Orleans.

1.) Early in February, I got word that His Holiness the Dalai Lama was coming to New Orleans for a three-day conference on Strength Through Compassion and Resilience. The conference was coordinated by Tulane University and coincided with their Spring commencement. The magazine sent me down for what would prove a transformative experience. A lot went on that weekend, and I even wrote an essay about it. (But if you wan to read it, you can either email me or wait until I find out if it’s been picked up by the literary journal to which it has been submitted.)

See you in the pages.