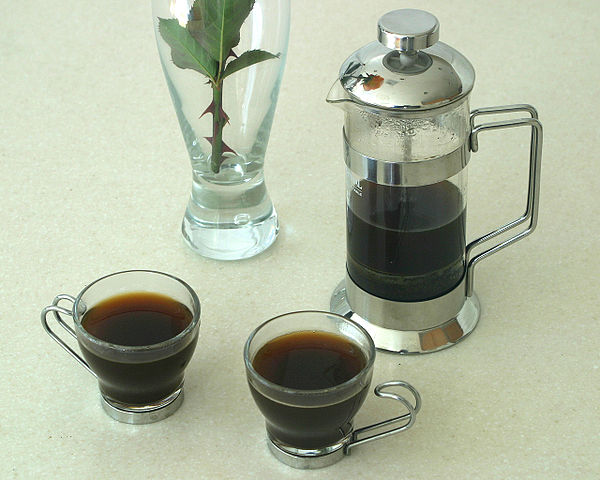 For years, I was one of those people who looked at the glass and steel lines of a French press sitting in the corner of a friend’s fancy-dancy kitchen with about the same look of condescension that I shot at countertop pasta machines. I mean, seriously, people. Why does a simple cup of coffee require special cups and surgical-grade pyrex and stainless to prepare?

Then Starbucks quit brewing my favorite variety. And, to be quite frank, what passes as brewed coffee in a Starbucks is much more aptly described as “burned coffee bean husks in muddy water.”

So I complained. That’s when the helpful barista  changed my life.

“Why don’t you order a French press?”

Surely she was joking. Who on earth would want one of those effete phallus-wannabees on their table? Certainly not me. I was anything but convinced, so she pressed on.

Now was I in a pickle! While I thought the French press was little more than a poncey affectation the Frogs used to mask an obviously depraved cultural turpitude, I had spent a king’s ransom in Starbucks over the years. Here was my opportunity to put one over on Starbuck and those dandy hairdressers all at once. Then I took a sip.

Sitting on the corner of my desk, right now, is the poncey coffee maker. I’m still not sure how I feel about it, and I most certainly didn’t buy one of those stainless numbers. No, mine is a much more reasonable plastic-and-glass model by Bodum. But it makes damned good coffee, even from crap beans. Every time I make a pot, coworkers flock to my desk, their cups perched in their open hands like something out of Dickens.

Now that I’ve had a press for about six months, I do have to admit I was wrong. There is something infinitely relaxing about the hands-on nature of making a press. The plunger slides–no, glides–the plunger glides down, leaving in its wake delicious refreshment. The glass beckons quietly from that shelf in the kitchen, “Hey…pick me.”

And sometimes, I imagine what happens when I leave the house and it’s just the kitchen utensils and my three cats.

They’re on the sofa, listening as the Bodum argues with the Keurig about which one makes a better cup.

I’m glad I’m not expected to settle that particular dispute. They can discuss it amongst themselves, when I’m not there.