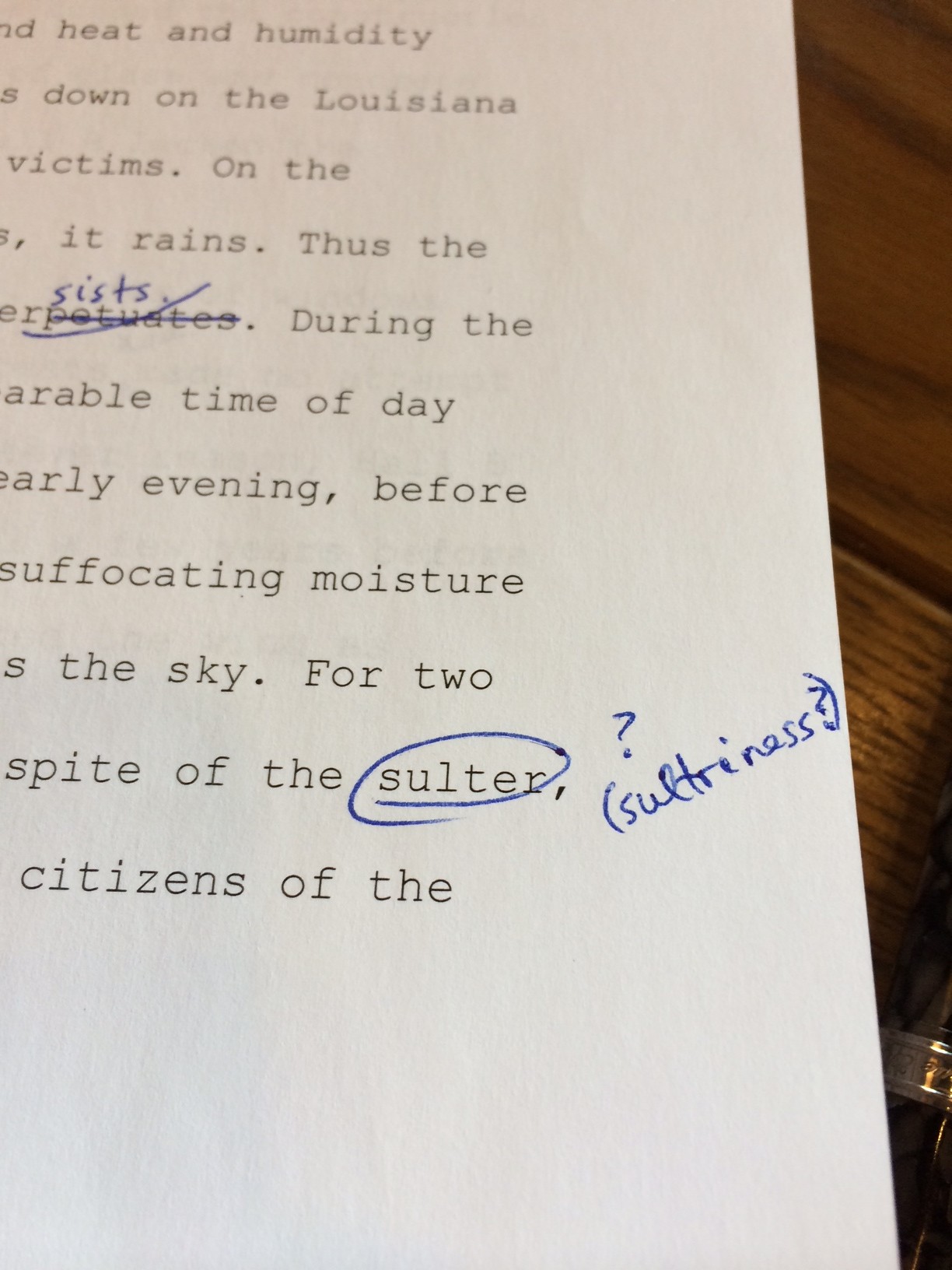 Or: On Hemingway, Fitzgerald, Faulkner and the English Language

There’s an old joke that goes something like this:

Why did the broke writer pay $5 for a latte at Starbucks?

How else would everyone get to see him writing his novel?

Sitting in a Starbucks before the mountain of pulp totaling some 350 pages, I’m slogging through the task of entering line edits on Anything But Ordinary, my third novel, which will enter its second edition printing sometime in July. I’m making good progress and am on page 55 when I stumble upon the sentence you see in the image to the left.  And that’s when my ego deflates. I forget in that moment three key facts:

1.) This book was a finalist for a major literary award and that manuscript included the word “sulter”

2.) This book was published and people liked it well enough to read it.

I’m not exaggerating, either, that “..in spite of the sulter, the draw of the sun proves too strong,….” brought me to a hard stop. I know this isn’t a word. I don’t need Microsoft Office’s snarky squiggle to tell me that. And I don’t need my patient, serenely skilled editor’s gentle blue pen to confirm it. Sulter is not a word. Even WordPress’s rudimentary spell check and Apple’s overzealous autocorrect rebel at writing that word. (I’ve changed it back six times in this paragraph. Yet, there it sat, on the next-to-last line of page 54.

Given that I scored well on the vocabulary portion of every standardized test I ever took, that I have an above-average vocabulary, and that I work with words, I began a trek down memory lane. How did I come to write this sentence? I remember where I was when I wrote it: sitting at my writing desk that faced out the front window of 1107 D North Second Street, the apartment I was sharing with my friend, Brandi. I remember what was going on in my head: I wanted to confer to the reader the entirety that is a hot, New Orleans summer, the particular kind of heat that bears down oppressively on the city. And I wanted to do so with a flourish.

Sitting on that desk would have been a ragged copy of Roget’s Thesaurus and a decent Webster’s Collegiate Dictionary. Surely if I searched for the word, I would have looked for it in the thesaurus or the dictionary? Maybe, I give myself too much credit, I intended to create a new word, since none of the others seemed to fit. Yet, today, at 37 and a dozen years removed, without thought or reference, I immediately replaced “sulter” with “swelter”–which I know is an archaic noun used to describe an oppressive heat.

The word replaced, I cannot kill that embarrassment. Then I begin to wonder if Messrs. Hemingway, Fitzgerald, and Faulkner all felt the same way anytime a typo or poor word choice or grammatical error found their way into print. (And I assure you, a cursory search of the first editions of In Our Time, The Great Gatsby, and The Sound and the Fury will reveal numerous typos…before even the end of the first chapter in the case of Fitzgerald’s “Gatsby.”) Those guys are of the kind of talent that makes writers stop writing–or to write harder, longer, and better until they reach the level of quality and literary integrity that puts them into that class.

Please for the love of all things holy do not misunderstand me. I’m not comparing myself to those literary titans. Even my titanic ego knows bounds. I’m simply wondering how they reacted to what amounts to little more than poor copy editing.

And then again, here we are, at page 54 and the sulter of a summer sun on a patio in New Orleans. I review the passage again, try to jog my memory. Did I labor over the words of this sentence when I wrote it, or did I just set the paragraph in my mind and toss the words down onto the page, only to glance over them once or twice in galleys? I try not to blush too much at this small embarrassment. Again, I can always blame it on youth and inexperience. Or I can blame it on rushing through a particularly swift patch of writing. At the end, I finally arrive at a realization: what does it matter? It’s there, in print, and will be for as long as the paper of that first edition survives.

–he said, just as he clicked “Publish” on a medium that, if the Internet Archive and/or NSA is to be believed, will live forever in the vast, digital wasteland of the Internet.

Note: There is a single, hardbound copy of the first edition of Anything But Ordinary still listed on Amazon.com. (link). You should buy it and save it as a collector’s item, in case one day I’m famous and it becomes valuable to possess the physical evidence of the time I attempted to create the word “sulter.” If you do, I’ll even sign it for you and initial “sulter” in the margin. – md