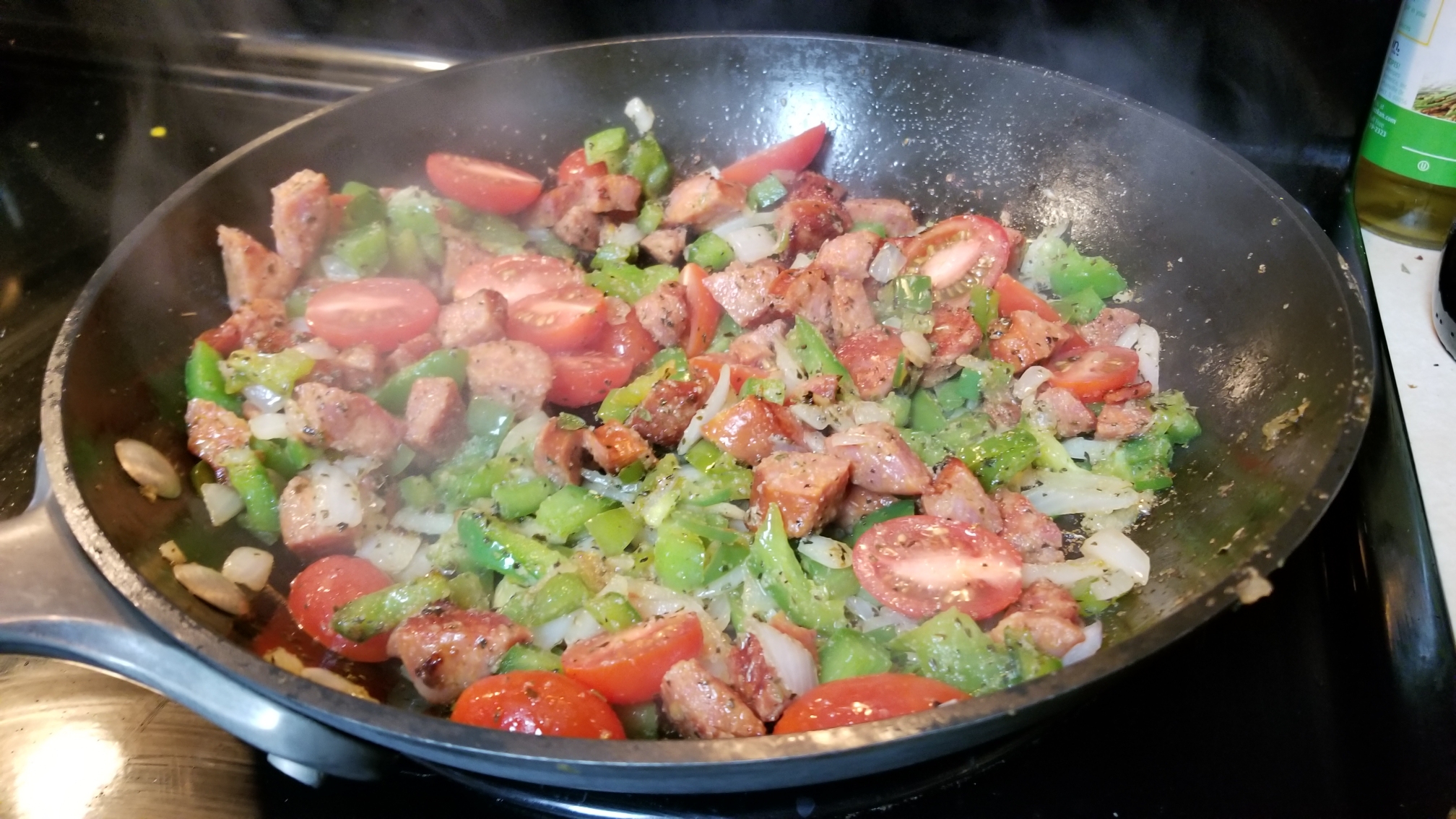 Or: How backing into my parking space, making my bed every morning, and a Sunday frittata saved my life.

Writing is a strange vocation to pick up. You take words — the things you and I use in conversation every day, whether we’re cajoling our kids (I’m looking at you, oh precious daughter o’ mine) into doing their daily chores or convincing a client that, no, you really do know best. (You know who you are.) But to say one is a writer, that is someone who lives and works with the written word, there’s almost something preposterous about the whole notion. “I’m a writer,” is just…pretentious.

Yet, that’s the case. For the better part of 20 years, that’s been the principle method by which I’ve earned a living. I put words on paper, those words are distributed, and for whatever reason, people read them — which leads to a paycheck. There’s just one problem with being a writer, though. It’s called “writer’s block.” And let me assure you, it’s as real as the pyramids at Giza.

Usually, all of the atoms of a writer’s body conspire to make sure the writer is sitting at a keyboard, pecking away, as I’m doing right now. The molecules that constitute our being are all wired for one task: filling up line after line with words that, in some way, help give meaning to the world as we see it. However! (And that’s a biiiiiig however…) Occasionally, our constituent parts decide to go on strike. We find ourselves sitting at the keyboard for hours on end, unable to complete so much as a text message, much less compose an entire article — or worse, a book. After finishing my MFA in 2013, I found myself in a prolonged period of writer’s block. I could complete an article or three, so long as I felt the pressure of a blown deadline bearing down on my soul. (I love my publishers.) But a book? Poor Miika has been waiting almost two years for a book that’s 90% written! (Have I told you lately how much I love my publishers?)

About a year ago, I decided to get serious about writing again. I knew I needed to bear down, knuckle under, and just spend time in front of the keyboard. Parts of the time, I’ve done better than others. Still, that was my goal. Lately, I’ve hit a renewed period of productivity and, at last, I believe my efforts are paying off. It all started with Adm. William McRaven, who gave a speech to a college somewhere (I linked it below) about why making your bed is an important step in life. It’s here that I’m going to take a little bit of a detour and reveal the part hotels have played in my life these last three years. (We’ll continue after the video. Watch it, because it’s important.)

Sitting in the restaurant of a hotel in Chicago, I watched this video about thirty minutes after I read an article about the value of backing into one’s parking spot. Aaron Botnick may have put me onto the story. I can’t recall. However, I remember reading the story and then watching this video, which had gone viral for some reason. I quickly dismissed both the article and the video and went about my day. I had people to manage, things to do, and backing into a parking spot wasn’t something that mattered much to me. Then, one of my clients — the one with whom I travel most often — took a sabbatical from the road to go into the movie business. I found myself longing for crisp sheets, a freshly made bed, and the little touches that made life in a hotel so nice. I started making my bed every morning. Then, a few weeks later, I started backing into my parking spots.

A year later, the psychological trick is paying off. My next step is to spend at least two hours a day sitting at the infernal contraption that is a keyboard and pecking away at…something, be it a magazine feature, a personal essay, a short story, or a screenplay. I’ve only recently begun this little hat trick, but it’s already paying off in spades. Writers are creatures of habit, after all, and this is the world I’m creating.

First, this is how my bed looks before I leave my bedroom every morning: 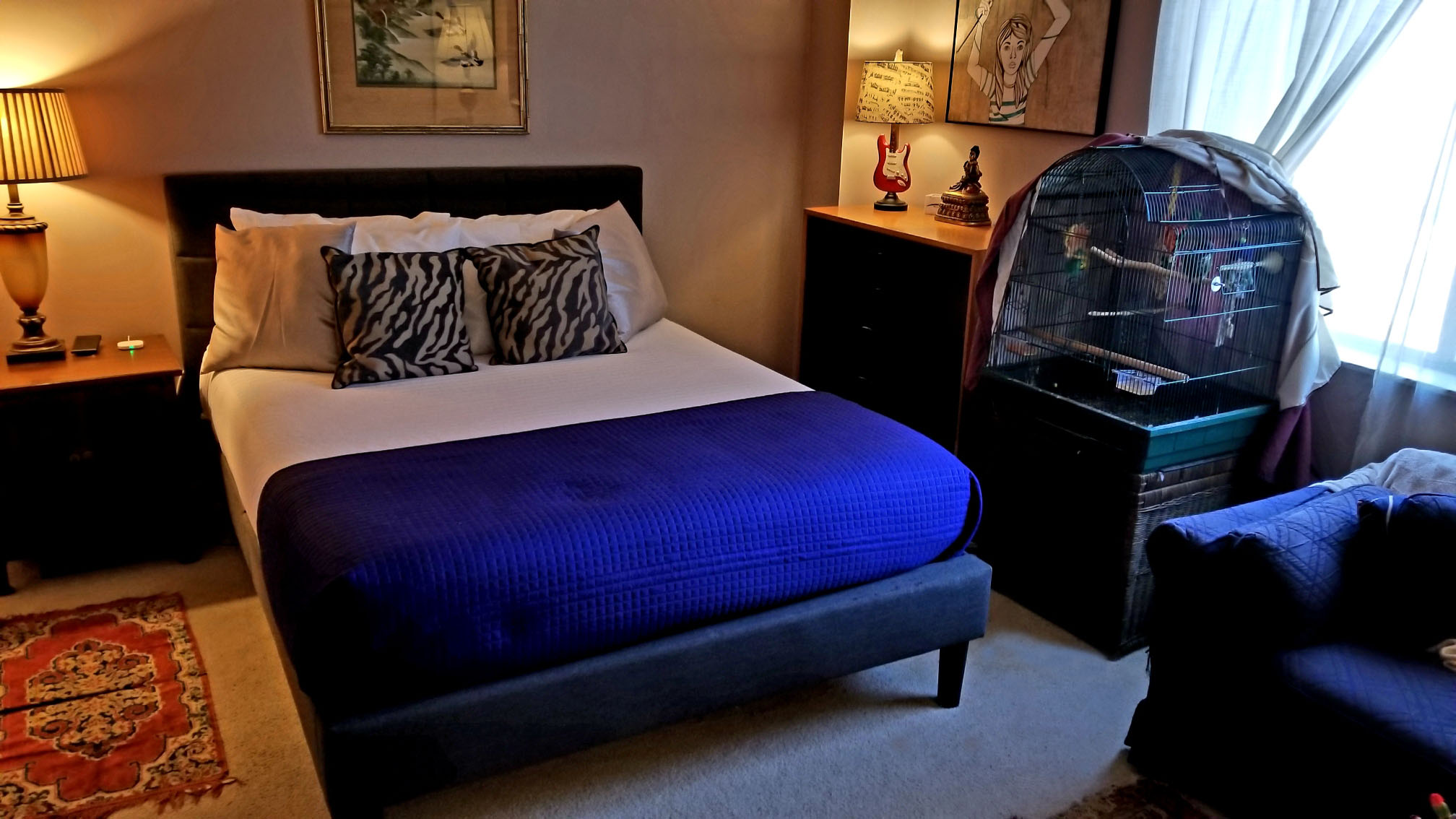 For almost a year, the only exceptions to this rule have been days when either I’m washing the linens or I know that I’m going to be back in the bed within the hour. Any other time, I spend the first few minutes in the morning making sure that, when I get out of the shower, this is what greets me. Adm. McRaven was right. You’d be surprised how much of an accomplishment this feels like.

The second part of this is backing into a parking space. Sure, it takes a few more minutes, but there’s a certain satisfaction to knowing your car is ready to move forward when it’s time to run an errand, go to work, or head out on a road trip. A few extra seconds to back up makes you feel like the world is yours and you’ve conquered it when you walk out your door and you don’t have to take a step backwards to move into the future.

A final part is a tradition I like to think is all my own. It’s the Sunday morning frittata.

Every Sunday morning, I get up earlier than I do on Saturday. I go to the kitchen, and I set about making a frittata that, usually, my daughter and I split. Some mornings, we have company here at the penthouse, and I make a larger frittata or I add additional dishes — potatoes on the side, extra bacon, and biscuits — to make the main course stretch farther. And, let’s be honest. Some “Sundays” are actually Mondays, because she may be working, or I may be traveling. Still, those Mondays are our Sunday, and we bustle our little plates out to the balcony to sit at the bar and enjoy breakfast al fresco.

Frittatas are remarkably simple dishes to make, and if you master them, they’re impressive to boot. So, in honor of my 18th year as a journalist and my newly found enthusiasm for the art of the frittata, I’ve decided to share with you my technique for the perfect Sunday morning treat. And maybe there’s just a hint of Louisiana in there for you. 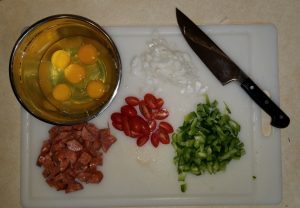 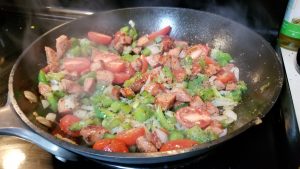 Preheat your oven to 450. While it’s preheating, heat Canola oil in a skillet with flared sides. As oven is preheating and oil is coming to temperature, chop your bell pepper, dice your onions, and slice up the andouille. Add the andouille to the skillet first and let it begin to brown, stirring frequently. Then, add bell pepper and let it begin to cook, uncovered, until the edges begin to brown. Add onions, sauté for five minutes, add the garlic, stir, and then cover. Count to 180, then beat the 5 eggs in a large mixing bowl. Use TWO FORKS, not one fork and certainly not a whisk. Let eggs set while you begin to prepare the second skillet.

In a second skillet, this one with *straight* sides, place the butter on a cold skillet and then set heat to medium high. Allow the butter to slowly melt. Use this time to beat the eggs a second time, adding the ricotta, sour cream, and half of your cheddar cheese. Let eggs set again, and you’ll see bubbles start to form in the surface. Don’t think about them, don’t look at them. Instead, pay attention to your straight-sided skillet. Swirl the skillet slowly so that the butter coats the bottom and the sides. While the butter and skillet are coming to temperature, whip the eggs one last time for 40 seconds, using your two-forks method. (Hold the forks like chopsticks for maximum air penetration.)

This third whipping is critical, for now the cheeses have started to break down in the mixture. As soon as you’ve completed whipping the eggs for the third time, pour the eggs into the straight-sided skillet. Removed your sauté skillet from the heat, and watch the eggs. As soon as they begin to form up and bubble, begin to gently scoop the andouille-onion-bell-pepper-garlic mix into the eggs with a large spoon, distributing evenly throughout. Sprinkle the top with the remaining cheddar cheese, and count to 30. 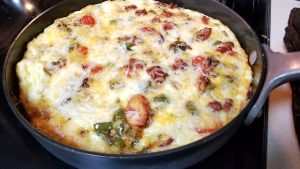 Place the skillet into your now-preheated oven. Set a timer for 10 minutes. Walk away. Go make a cup of coffee. Call your mom. Read the front page. Do not touch your oven until the timer dings. Just trust me.

When the timer dings, remove the pan from the oven. The eggs should be firm, the cheeses should be browned, and the skillet should be sizzling. Set it on a trivet or the stove and let cool for 7-9 minutes. Loosen the edges of the frittata with a spatula. Then, either serve from the skillet with a pie server, or turn it over onto a plate (and then again onto a serving dish) so that the “top” is the top and the “bottom” is the bottom.

Serve with coffee, biscuits, OJ, or your favorite breakfast Bloody Mary. (It’s a Louisiana-inspired dish, after all.)

I prefer mine with the Failing New York Times (online edition), Community Coffee, and a biscuit with lingnonberry preserves, on the balcony, watching the deer play.

Make sure you make your bed first.