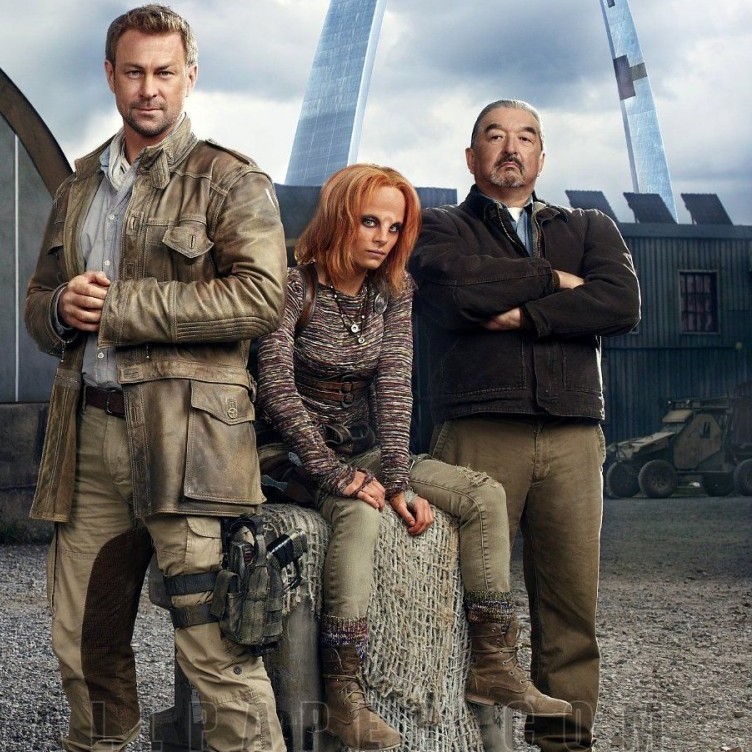 As a huge supporter of the Colonial Cause, I was hopeful that htis attempt at post-apocalyptic sci-fi opera would fill the hole that BSG left when it wrapped a couple of years ago. So far, the hole is still there.

I’m not writing off “Defiance” yet and to be clear there are some strong selling points. One of them is that the single best word to describe the 2-hour pilot episode last night is “ambitious.” This is definitely an ambitious show. But ambition is a double-edged sword. You can either succeed in your ambitions or you can fail.

As a stand-alone effort, the 2-hour pilot failed to meet its own ambitions. Partially, this is because of what it was attempting to do.

First, we’re on Earth, but it’s not Earth as we know it. Instead, it’s some terraformed thing that the space aliens (all eight species of them, working in unison) started mucking with shortly after their arrival. (The Mississippi River is gone, for example.) This necessity to terraform is one of the huge, gaping holes in the Defiance universe that the 2-hour pilot failed to address. Why do aliens who breathe oxygen and drink water (presumably. They’re seen throughout consuming beverages that humans are also consuming) need to terraform anything?

And speaking of aliens. Did I mention that there are aliens–eight species of them? That we’re expected to recognize immediately? All the while, we’re also expected to recognize about twenty different major characters, each one of whom were introduced within the first twelve minutes of the broadcast. This is too much to handle for even the most devout sci-fi nerd. Fiction writers will tell you, too, this is a major no-no.

At the same time, it was all unnecessary. We could have easily done without the Romeo+Juliet treatment of the kids. Couldn’t they have just been fighting over something stupid, you know, like kids do? Why do we have to have the exposition about Mia Kirschner’s whoremonger character being the sister of the mayor? Why does she have to be the Mayor’s sister anyway? Doesn’t this needlessly complicate what would have been a much more entertaining and challenging universe for the new Lawkeeper?

What I was left with at the end of the 2-hour premier of Defiance was a single word: pedestrian. Which is interesting, since the characters all spend a whole lot of time walking around and doing nothing much. Five minutes were devoted to various individuals running places.

Meanwhile, so much could have been fixed so easily. How? I’m glad you asked.

Joshua Nolan is the new lawkeeper in defiance. (Think Mal Reynolds meets Jack Carter, with a healthy dose of Bill Shatner. Not Captain Kirk. Just Bill Shatner.) We find out at the very end of the show that Nolan is the same little boy who was standing in St. Louis under the arch when the aliens (all eight species of them) arrived. Why do we wait on that reveal? Instead of a diary-writing quasi-daughter revealing what happened, why not put the locus on Nolan? Let’s see him giving the explication. After all, it’s his planet that got taken/destroyed/changed/etc. And he’s the focal point of the moment. So alternate opening:

Young Joshua Nolan is playing in the park in St. Louis. Arrives thusly the aliens and the camera zooms in on Nolan’s eyes. Boom. Cut to voiceover. Zoom out, same eye, grown up Nolan. He’s standing in the wreckage of the space ship. Every single thing that happened in the first half hour could have been handled in a five minute sequence.

I say do this why? Because. The whole show was nothing but one cliché after another. Why subject us to all these needless clichés to spare us the one cliché opening?

There are a million ways this show could be made better, and just as many in which it might recover. Right now, I’m lamenting that I didn’t watch Castle–and Castle featured a Big Foot subplot, which should tell you something about my opinion of Defiance.