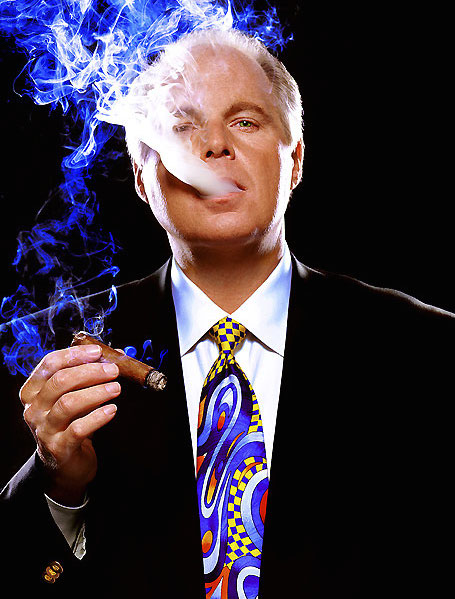 Today, I made the mistake of tuning into the Rush Limbaugh program and just so happened to catch El Rushbo opining what he sees as the sudden fixation of the American Left on the literature of dystopia–specifically, The Hunger Games series and how, in his estimation, this series of books and films which he has neither read nor watched “glorifies kids killing kids.” While I’m no particular fan of Rush, I do from time to time try to consume content from people with whom I disagree–and Rush leaves plenty of room for disagreement. And while I would never go through the motions of actually calling in and attempting to engage someone who has the ability to mute a call and a staff capable of editing on the fly using the 15-second live-to-air delay, there are moments where I find myself screaming at the radio.

Today was one such moment.

Among the highlights from this broadcast–which was triggered by the Isla Vista rampage perp’s somewhat tenuous connection to the Hunger Games franchise–Rush said that dystopian literature is a relatively new phenomenon that came about “in the 1970s and 1980s when the Left became fixated on nuclear weapons.”  There’s ignorance in the world, granted. But there are times where ignorance exceeds the norm, that it crosses some invisible threshold of excess and, in that moment, becomes deserving of a definitive article. Yes, boys and girls, Rush Limbaugh’s view of the brief history of dystopian literature is a supreme example of The Ignorance. Here’s why:

The list of dystopian literature stretches back more than a century. Rush’s beliefs aside, the facts simply don’t line up with his assessment, either, that “people who grew up in the 1950s would get sick” if they saw works like The Hunger Games being printed or produced. Let’s take a literary trip, shall we? How about something simple…something that Rush Limbaugh, having graduated from high school in 1969, would have read–had he done his homework in English class.

Lord of the Flies is a 1954 dystopian novel by Nobel Prize-winning English author William Golding about a group of British boys stuck on an uninhabited island who try to govern themselves with disastrous results. Its stances on the already controversial subjects of human nature and individual welfare versus the common good earned it position 68 on the American Library Association’s list of the 100 most frequently challenged books of 1990–1999.[2]The novel is a reaction to the youth novel The Coral Island by R. M. Ballantyne.

Yes, the Nobel Prize-winning book Lord of the Flies, which has been standard reading–and often challenged–since about 1959 seems to have avoided Rush’s radar. But we can surely overlook a single literary omission, right? Let’s go back to our Summer Reading List, where we’ll find, among others, two certain darlings of the American Right, championed by the likes of Sen. Ted Cruz and Sen. Rand Paul for their “prescient” view of American society.

Animal Farm is an allegorical and dystopian novel by George Orwell, published in England on 17 August 1945. According to Orwell, the book reflects events leading up to the Russian Revolution of 1917 and then on into the Stalin era in the Soviet Union.[1] Orwell, a democratic socialist,[2] was a critic of Joseph Stalin and hostile to Moscow-directed Stalinism, an attitude that was critically shaped by his experiences during the Spanish Civil War.[3] TheSoviet Union, he believed, had become a brutal dictatorship, built upon a cult of personality and enforced by a reign of terror. In a letter to Yvonne Davet, Orwell described Animal Farm as a satirical tale against Stalin “un conte satirique contre Staline“,[4] and in his essay “Why I Write” (1946), he wrote that Animal Farm was the first book in which he had tried, with full consciousness of what he was doing, “to fuse political purpose and artistic purpose into one whole”.

There’s that “dystopian” word again. In a novel published in 1945, no less. But that Orwell fellah sounds familiar. Is it possible he’s written other books we might have been forced to read in that evil compulsory education system?

Nineteen Eighty-Four, sometimes published as 1984, is a dystopian novel by George Orwell published in 1949.[1][2] The novel is set in Airstrip One (formerly known as Great Britain), a province of the superstate Oceania in a world of perpetual war, omnipresent government surveillance, and public manipulation, dictated by a political system euphemistically named English Socialism (or Ingsoc in the government’s invented language, Newspeak) under the control of a privileged Inner Party elite that persecutes all individualism and independent thinking as “thoughtcrimes“.

The list goes on, too. There’s Fahrenheit 451, by Ray Bradbury. There’s On the Beach by Nevil Shute, which to Rush’s credit does have a bit to say about nuclear weapons. At least he got part of that right. Ayn Rand’s Anthem is a frequent offender of Christian Morals in the American South. The list goes on and this is by no means an exhaustive list of general high school dystopian fare. It’s just fodder for thought as you consider the Right’s attempts to admonish Hollywood for the Isla Vista rampage. But what do I know? I only have a degree in literature. Surely Rush’s Ph.D. in Contemporary Literature outranks my lowly B.A.–what’s that you say? You say he doesn’t have a degree in literature?

Art didn’t create this young man, Mr. Limbaugh. Literature didn’t make him psychotic. Of that much I’m sure. What I’m not sure of is why you, who sit at a microphone daily and command a bully pulpit in front of some 20 million listeners, insist on lying to the American people. That’s right. Lying. Because it’s fundamentally impossible that you can quote at length passages from Ayn Rand’s dystopian novel Atlas Shrugged and not know that it was published in 1957.