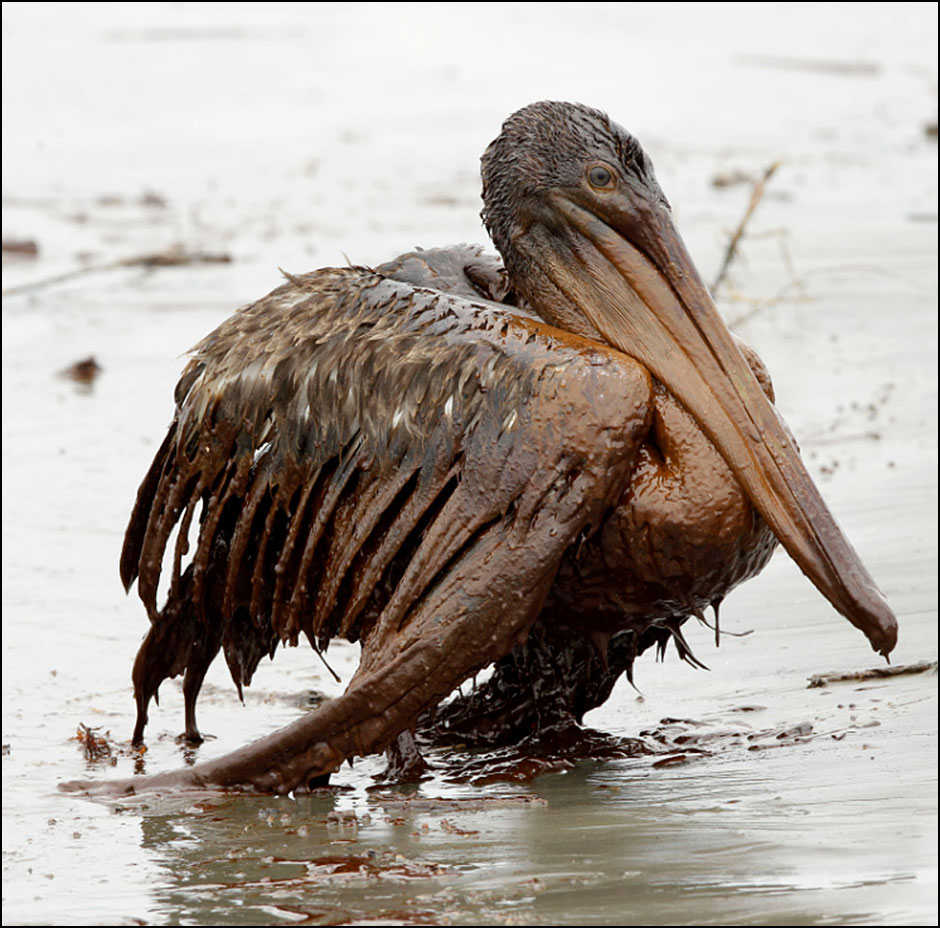 Or: Demythologizing the Politics of the Gulf Oil Spill

It seems like years ago that I was standing on the beach in Grand Isle, Louisiana, with a 4th generation shrimper who was watching wave after wave of oil-contaminated water lap onto the shore.

In that moment, this nameless man was no longer a shrimper. He was a “contractor” working for the “containment effort” and, instead of keeping the oil out to sea and cleaning it off the relatively calm waters there, he was inexplicably tasked with shoveling up pounds of sand and loading it onto trailers behind gas-powered golf carts, to be hauled off to some facility some where for some purpose no one could define.

I had seen ten thousand acres of oil coating delicate marsh grass in the ‘prairie’ between Port Fourchon and Grand Isle. And on the beach at Grand Isle, countless miles of orange “barricades” stacked three, four and even five high a few dozen yards away from the water’s edge, the last line of defense so to speak for the “bits of oil” that might sneak through the oil booms or Gov. Bobby Jindal‘s “burm” project. On those beach barricades, there wasn’t a run of more than five feet that didn’t see thick, dark crude running over it.

Every morning I would open my email and read about the newest discoveries of oil patches, the lengths of new slicks, and the areas of rapid response deployment. Then we would trek down to whatever carefully controlled media event we were sent to in order to control the image of the response. And in the afternoon, we’d spend the time between lunch and Gov. Jindal’s afternoon presser talking to people and trying to catch a glimpse of the devastation. Our days at “work” would usually end with the Governor, standing at a podium, the gulf gleaming behind him as he told CNN, Reuters, Agence France, and Pravda of the “miles and miles of oil,” inches and inches thick in places with exotic names like “Belle Terre” and “Barataria Bay.”

But that was then and, my how much has changed in the last eight months.

A new, insidious myth is spreading throughout the American body politic. It is spreading because many see Jindal as a great hope for a renaissance of the Conservative movement, a chance to take the Grand Ol’ Party back from the Tea Party interlopers and return it to a more genteel, refined version of Republicanism favored by Reagan, Nixon and even Eisenhower.

B.P. was the victim of a minor oil event and a major public relations disaster when the alarmist, Leftist, agenda-driven media hopped on the bandwagon and used the crisis to further its own anti-American wacko green movement agenda. For his part, Jindal was able to rise above the crisis and see the truth: that there was very little oil in the swamps and on the coast of Louisiana.

That is the new paradigm of oil spill history. And, to be fair, Jindal has had nothing to do with the creation or propagation of this myth. He has simply benefited from it.

So, let’s be clear on some facts:

1.) Eleven men were killed in the initial explosion and fire. Subsequently, more than 200 individuals were treated for cleanup related injuries or illnesses. The longterm health effects of the chemicals used in cleanup are still unknown.

2.) More than 320 miles of Louisiana shoreline were impacted to the point of “serious damage”. For perspective, the Louisiana coastline stretches from Mississipp to Texas, totaling 397 miles.

4.) Though the spill dwarfed the Exxon Valdez incident, warmer water and a host of environmental factors could mean the oil itself will cause the least damage to life in the Gulf (exclusive of the marshes, which one ecologist said will disappear as a result of this  disaster). The biggest long-term effect of the spill will be the millions of gallons of chemical dispersants pumped into the water.

5.) The loss of wildlife is staggering: 6,814 dead animals were collected through November. Among them, 100 dolphins and 609 endangered sea turtles. Since November, another 68 dolphin carcasses have been collected, including more than a dozen malformed infant dolphins. Also, scientists are noting a new, more disturbing trend: serious birth defects in higher marine mammals.

I could keep going, but you should be at least starting to grasp the picture.

Do not let this new myth become the new paradigm in Gulf Oil Spill history. By keeping this issue active and alive in the inboxes of your representatives, talking about it to your friends, and passing on links to this post and other stories, you can play a part in making sure the American People are not the victims of a massive hoax perpetrated for socio-economic gains.

Meanwhile, write your congressman, your senators and, if you’re in Louisiana, the Governor and your state Legislators, to demand justice for the Louisiana Gulf Coast. Do not let the unscrupulous among us turn this into a political advantage or, worse, a lie to perpetuate the myth of the “responsibility” of B.P.

There is no weapon like a well-educated populace. The responsibility is ours.